Vulnerability assessment as a first step of climate change adaptation

For a municipality to become the motor of climate change adaptation, integrating and coordinating the local knowledge and skills, they first have to discover the settlement’s resources regarding society and natural environment, their plans and ambitions, the municipality’s vulnerability and exposure to climate change, and of course their ability to adaptation. To this end, one of the first commitments under the “Municipalities as integrators and coordinators in adaptation to climate change”, LIFE16 CCA/HU/000115 (hereinafter referred to as “LIFE-MICACC”) project implementation was that the five partner municipalities should perform a vulnerability assessment of their own settlement, with as big social inclusion as possible.

Bátya is located along the Danube River, in the Southern Great Plain, five km away from Kalocsa. The agricultural character is dominant in the settlement with the production of “kalocsai paprika” and garlic. Beside the large-scale agriculture, backyard self-sufficiency and local market production are also typical. The number and expected growth of heat wave days is outstanding at national level in Bátya. The number of rainy days will decrease as rainfall intensity increases. In connection with this, the frequency and length of dry periods will also increase in a traditionally heavily exposed drought area, but in rainy periods the likelihood of inland water will also increase.  As a result of the increase in heat wave days, the vulnerability of the elderly, children and people with cardiovascular diseases intensifies. The vulnerability of local agriculture is also growing as the main crop varieties are highly water demanding and sensitive to drought and inland water. Bátya’s drinking water comes from the Danube, where the working system is highly sensitive to rising water level fluctuations. Adaptability to the expected effects of climate change in Bátya is negatively influenced by high unemployment and low levels of education and household financial savings. Agriculture is characterized by larger farms with more financial resources and adaptability. However, the main channel used for irrigation is not owned by farmers, which also increases their dependency.

Expected increase in drought periods and involvement of Bátya village 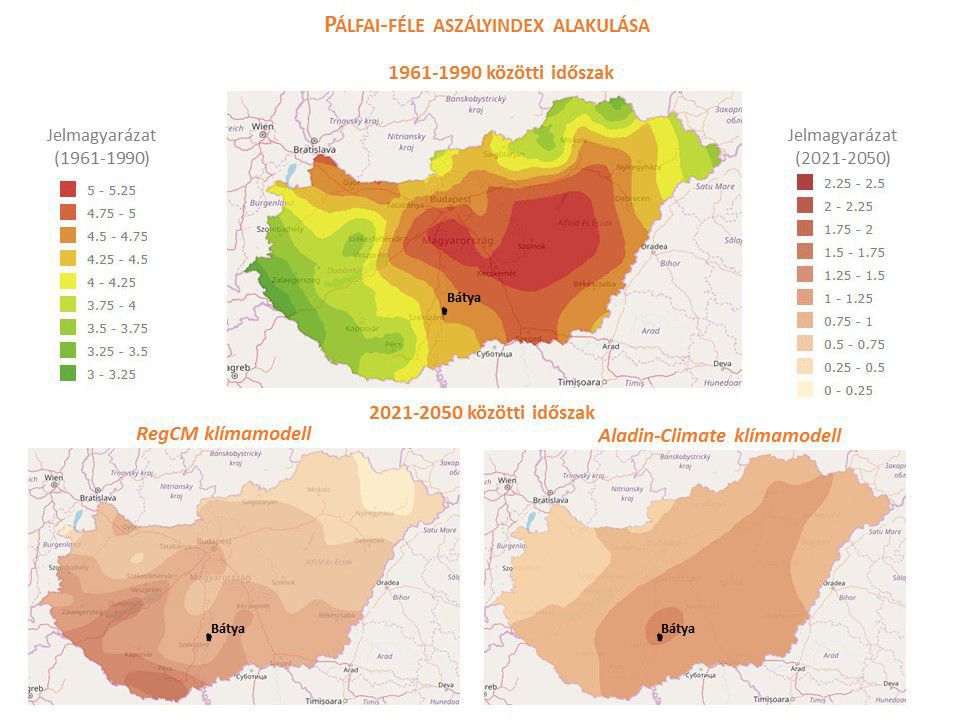 In Püspökszilágy, which is the only hillside partner settlement, where the main problem is erosion and the resulting recharge of the riverbed and artifact, as well as frequent lightning floods. Two-thirds of the outskirts of the settlement are forests, one-third are arable land, where mostly two farmers produce monoculture from wheat, sunflower and rape. In addition, livestock farming is also significant. Water demand in local industry and services is negligible. The settlement has its own spring and water tower, as well as its infrastructure and public utilities. There is no device at the upper reaches of the Szilágyi stream that would be suitable for retaining and slowing down the waters falling through larger rains, which poses an escalating threat to the flooding of the village and soil erosion. The intensity of rainfall is expected to increase in the future, despite the fact that the annual amount of precipitation is characterized by decrease. At the same time, the length of dry periods, but also the frequency of flash floods, will increase, which greatly heightens the vulnerability of the agricultural production. The large-scale elderly population is also highly sensitive to these climate change trends, particularly during heat wave periods, for which the municipality responds with social measures and monitoring network.

Rákócziújfalu is located in the Middle Tisza region. Part of the area was flood- flood-plain before the river regulation.  By now the former wetlands have disappeared and a large part of the municipality’s administrative area is under intensive agricultural cultivation. In this context, the proportion of areas under grassland and forest is low. The main crops of the agricultural settlement are cereals, strawberries and vegetables. In addition to the monoculture production in the outskirts, the vegetable and fruit growing on the farm’s backyard is still typical. It has good institutional infrastructure and green space in the inner city. It is expected that the local weather, which is not too rainy, will be drier, the average temperature and the heat wave periods and their intensity will increase. Backyard farming is particularly sensitive to these environmental changes. In the past 15-20 years, the appearance of inland water has become more frequent in the settlement in spring. Long-standing water cover makes it impossible to carry out most of the agricultural work, damages crops and causes crop failure. Among the harmful effects of indoor flooding, many old built residential buildings have become wet, their condition has deteriorated, cellars have become unusable, and many fruit trees have been destroyed from the gardens due to inland water. 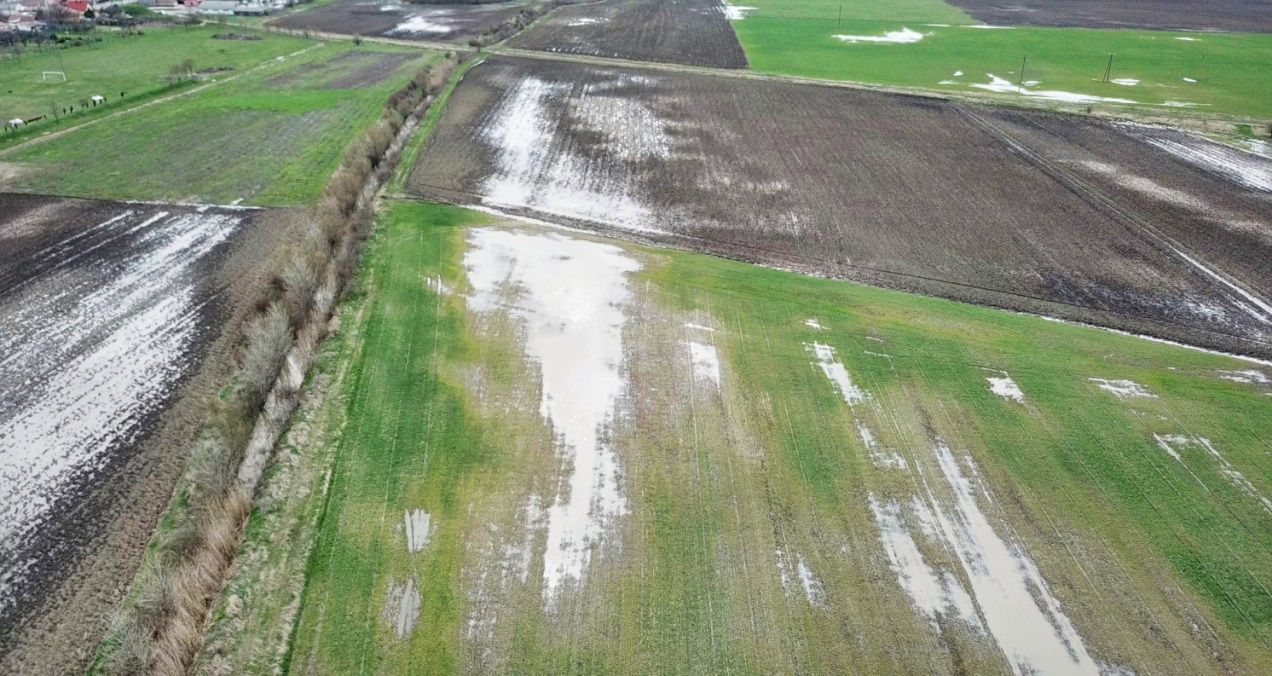 Ruzsa is located on the sand dunes region (Homokhátság) of the Southern Great Plain. The settlement was once covered by water periodically on a significant surface before the Tisza was regulated. Its estate structure was already fragmented in the 19th century, and it is related to soil conditions: manual labour-intensive agriculture, mainly vegetable and fruit cultivation. Nowadays these areas are mainly used for agricultural cultivation, which is also the largest employment sector in the settlement. The area is still characterized by the scattered farmland, small plots of land and parcels created in the 19th century. Ruzsa’s institutional and infrastructural coverage is good, although the access to public utilities and road networks is still unsatisfactory to the large amount of population on the outskirts of the settlement. The already dry settlement is expected to continue to dry and the average temperature to rise, while the intensity of the rainy periods increases in some seasons. The decrease in the quantity of surface and groundwater is drastic. The drilled wells must be lowered deeper in order to find a stable water base from which irrigation can be done. With the decline of waters, the microclimate’s regulatory role has also been lost. 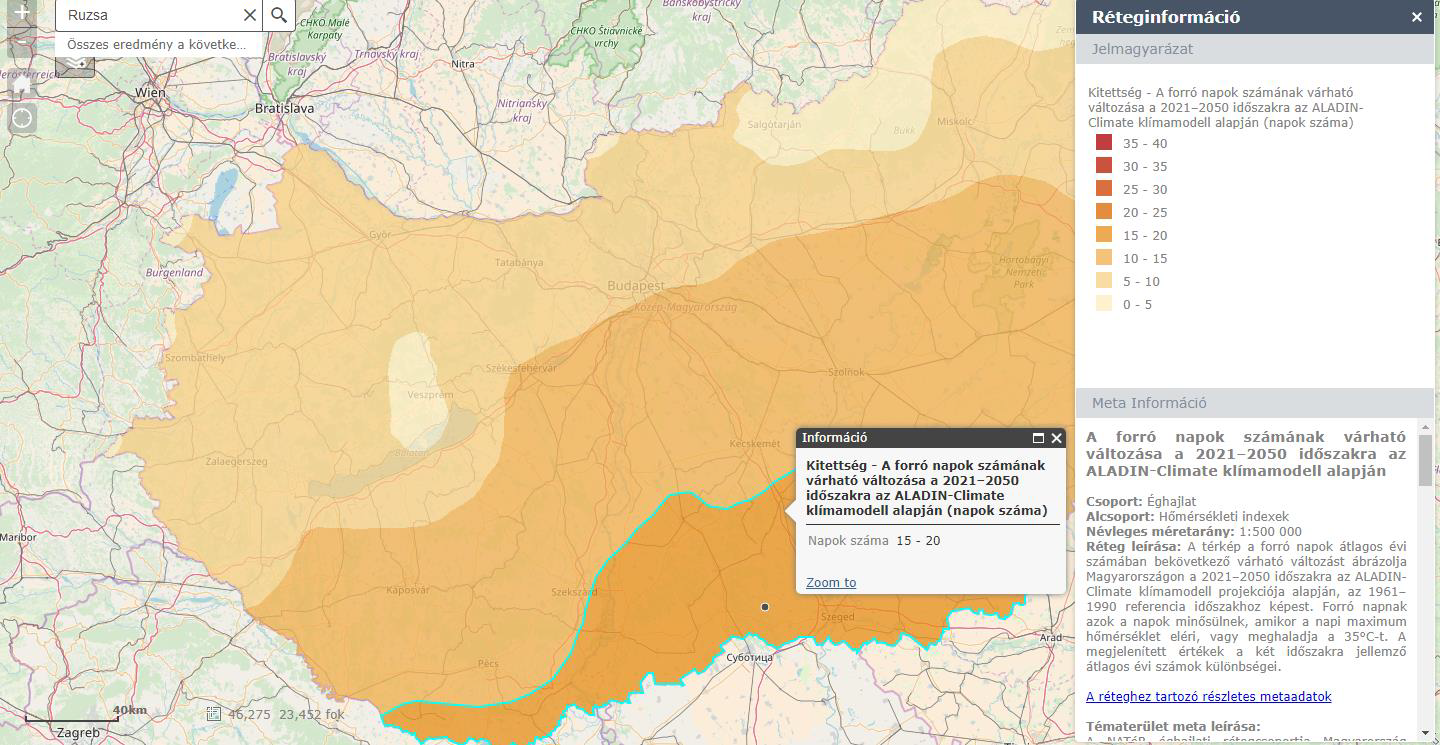 Tiszatarján is located in the Northern Great Plain, on the west bank of the Tisza. Before the river regulation, the settlement lies on the flood plain of the Tisza River, and nowadays a quarter of its territory still belongs to the flood plain, which is the main source of its vulnerability. Increases in the frequency and magnitude of floods, the prolonged periods of the dry and inland water are most likely to realize in agricultural losses, water shortage periods and the spread of invasive species. Besides the cultivation of crop, corn and sunflower production, livestock farming is also very important, especially pigs and a small number of cattle on the floodplain, which determines the life of the settlement. In recent years, it has been observed that summers are warmer every year and the number of hot days is increasing. The frequency and intensity of heat wave days is a serious health problem. The most risky groups during the hot days are the elderly people, children, people with hypertension, people with diabetes, and people with cardiovascular diseases. The network of social institutions for children, young people and elderly is well organized. The increase in the number of heat wave days also typically increases the vulnerability of these groups, with the addition of allergenic plants and mosquitoes. 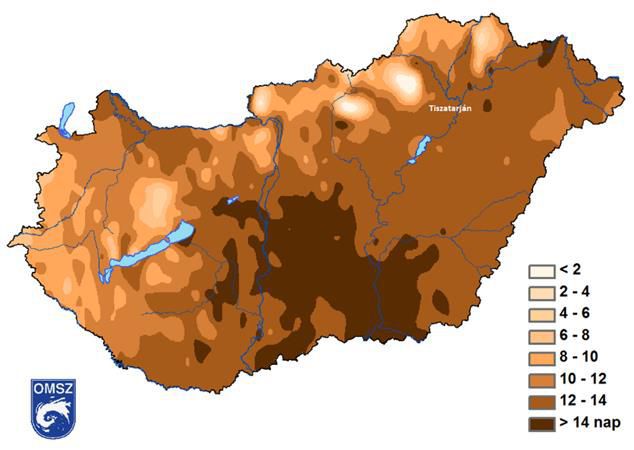 In the completed vulnerability studies, the municipalities also identified adaptation possibilities and measures, which are partly natural pilot water retention solutions in the framework of the LIFE-MICACC project. These solutions aim to provide local resources for water management in municipalities, providing small-scale solutions close to nature, low-budget and feasible by the local government, listening to and integrating  the needs and ideas of local actors – residents, farmers, civilians and the business sector – into adaptation measures, therefore, to achieve real social inclusion.

The full content of vulnerability tests will be available on the websites of the settlements: