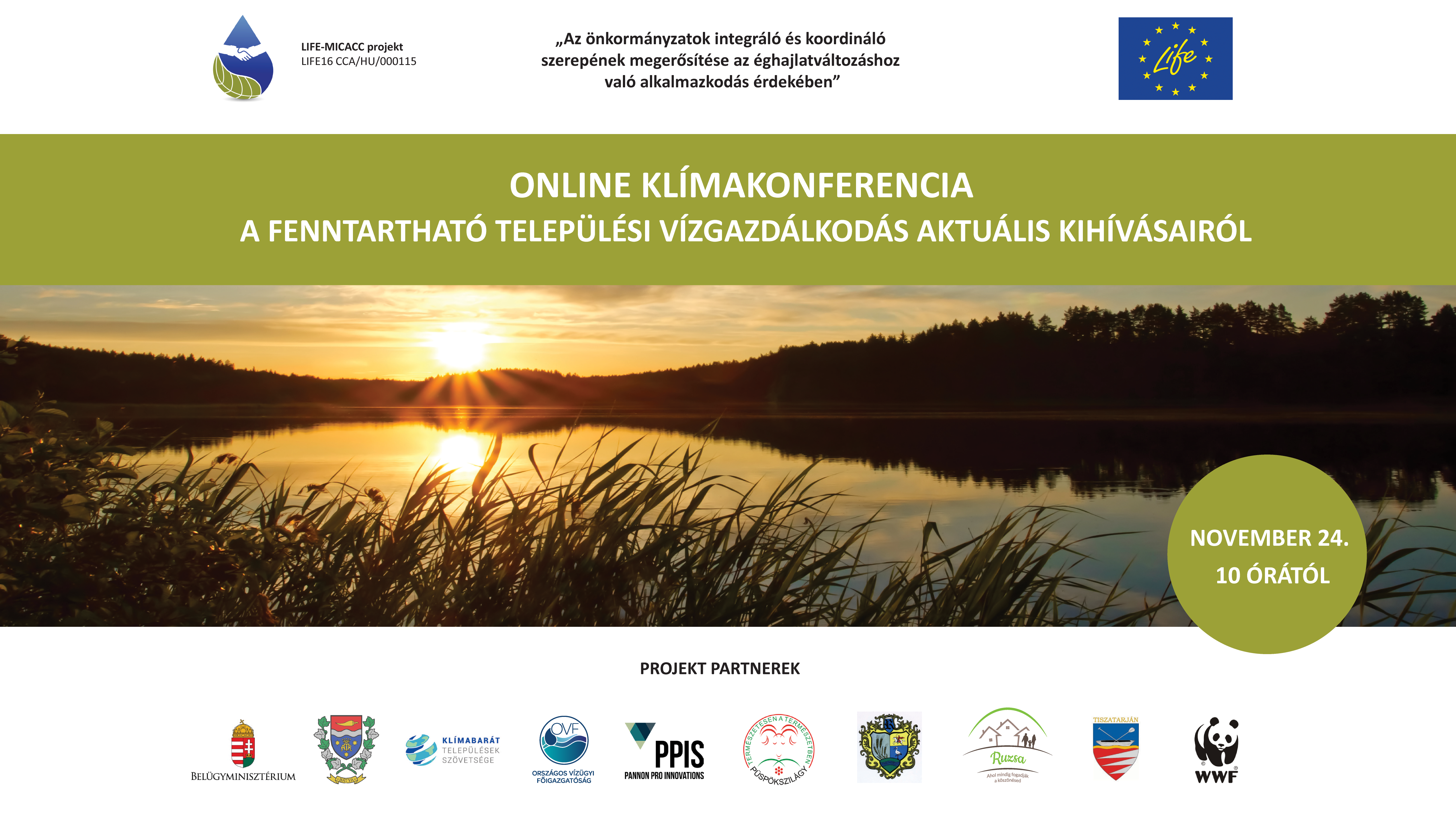 Within the framework of the LIFE-MICACC project, the “Actual Challenges of Sustainable Municipal Water Management” online climate conference was organized with the help of the Association of Climate-Friendly Municipalities, the Municipality of Veszprém County, the Coordination Office for Municipalities (Ministry of Interior) and the Pannon Pro Innovations Ltd., held on the 24th November 2020.

Because of the COVID-19 pandemic regulations the event was held online, instead of the planned location in Veszprém.

Dr. Miklós Dukai, Deputy State Secretary for Municipal Affairs from the Ministry of Interior gave the opening speech, highlighting that the Ministry of Interior had already realised in 2016 the importance of local adaptation to climate change and water retention measures, especially the key-role municipalities play in it. During the LIFE-MICACC project they aimed to create model-like constructions, which are adaptable to other Hungarian municipalities. After him, Éva Vörösmarty, the vice-president of Veszprém County Assembly greeted the participants and introduced Veszprém County’s climate conscious actions, efforts and documents. She was followed by Lajos Kovács, president of the Association of Climate-Friendly Municipalities, who stressed that they are the only association for municipalities in Hungary which is organized thematically. He called the attention to several practical problems, like that we are wasting more water than three quantities of Lake Balaton.

Zsuzsanna Hercig, LIFE project manager from the Coordination Office for Municipalities (Ministry of Interior) introduced the project shortly. She also laid emphasis on the key role of municipalities in adaptation to climate change, for though it is a global problem, we can take repercussion against it more effectively on local level. Highlighting the importance of replicability of the constructions, which is an important peculiarity of LIFE projects, she introduced the Adaptation Guide, one of the many deliverables of the project. Also from de project deliverables, the e-learning course which will soon be sent to every mayor and notary was also highlighted in her presentation.

She was followed by Dr. László Balatonyi, Head of Unit in the General Directorate of Water Management. He spoke about a unique problem of Hungary, that the flood, excess water and drought mostly occur on the same part of the country (Tisza region), presenting a challenge to the national water management officials. In addition, extreme weather conditions occur more frequently, thanks to the global climate change. Nowadays, drought periods occur in every 3 – 5 years, but the number of flooded territories is also increasing year by year. There are more and more local, county and national water management program and concept, but they have to be supervised every now and then. Last but not least, he highlighted the importance of the spread of the integrated local water management approach.

Dr. Balatonyi was followed by Dr. Endre Domokos, professor of the University of Pannonia, Veszprém. He said that whereas the number of significant floods shows a decreasing tendency, in parallel the number of heat wave days will double by the end of the century, triple in some territories of the country. According to him, the problem could be solved by reusing grey water or cleansed wastewater. These types of solutions are typically used in the southern countries of the European Union or in the state of Florida, where the number of drought days has been a serious problem for years. According to the international tendencies, 30% of the cleansed wastewater can be reused by the agriculture, and fifth of it by the industry. However, in Hungary not only the regulatory environment, but the society’s perspective and stereotypes also hinder the reuse of cleansed wastewater.

After the break, Sándor Tordai, mayor of Püspökszilágy continued the event. He presented the NWRMs created in Püspökszilágy in details:  4 natural stone sediment traps’ creation and reconstruction, 7 woody dam and a side reservoir got created within the framework of the LIFE-MICACC project alongside the Szilágyi stream. He told the participants proudly, that the complex system protected the settlement from force majeure damages during the summer’s flash flood period.

Klára Kerpely, colleague of WWF Hungary followed him with presenting several European NWRM “best practices”, which were visited by the project partnership during international study trips. The first “best practice” was the case of the Czech settlement, Hostivice, where drained swamps’ rehabilitation has been carried out. The other example was the case of Belford, United Kingdom, where local small stream’s floods endangered more than 30 properties daily. Since the settlement is quite small, they had a limited budget, which they used to create several natural runoff slowing artefacts on the upper parts of the stream. This project represents the importance of the river basin level water management. Klára Kerpely thinks that in the future we have to implement similar interventions in Hungary. She finished her presentation by showing the conclusions of the French and Polish study trips.

The conference was finished by the presentations of Edina Budai and Lóránt Riesz, colleagues of the Pannon Pro Innovations Ltd. Edina Budai presented the results of the runoff modelling on the LIFE-MICACC projects’ five pilot sites’ river basin. These models can detect which parts could be flooded in case of higher water flow, showing in which territories should natural water retention measuresbe constructed

The conferences moderator, Dorottya Horváth-Teveli, closed up the conference with presenting her organization’s main focus and activities, and 4 awareness raising leaflets, which can be reached in Documents alongside the presentations (only in Hungarian).