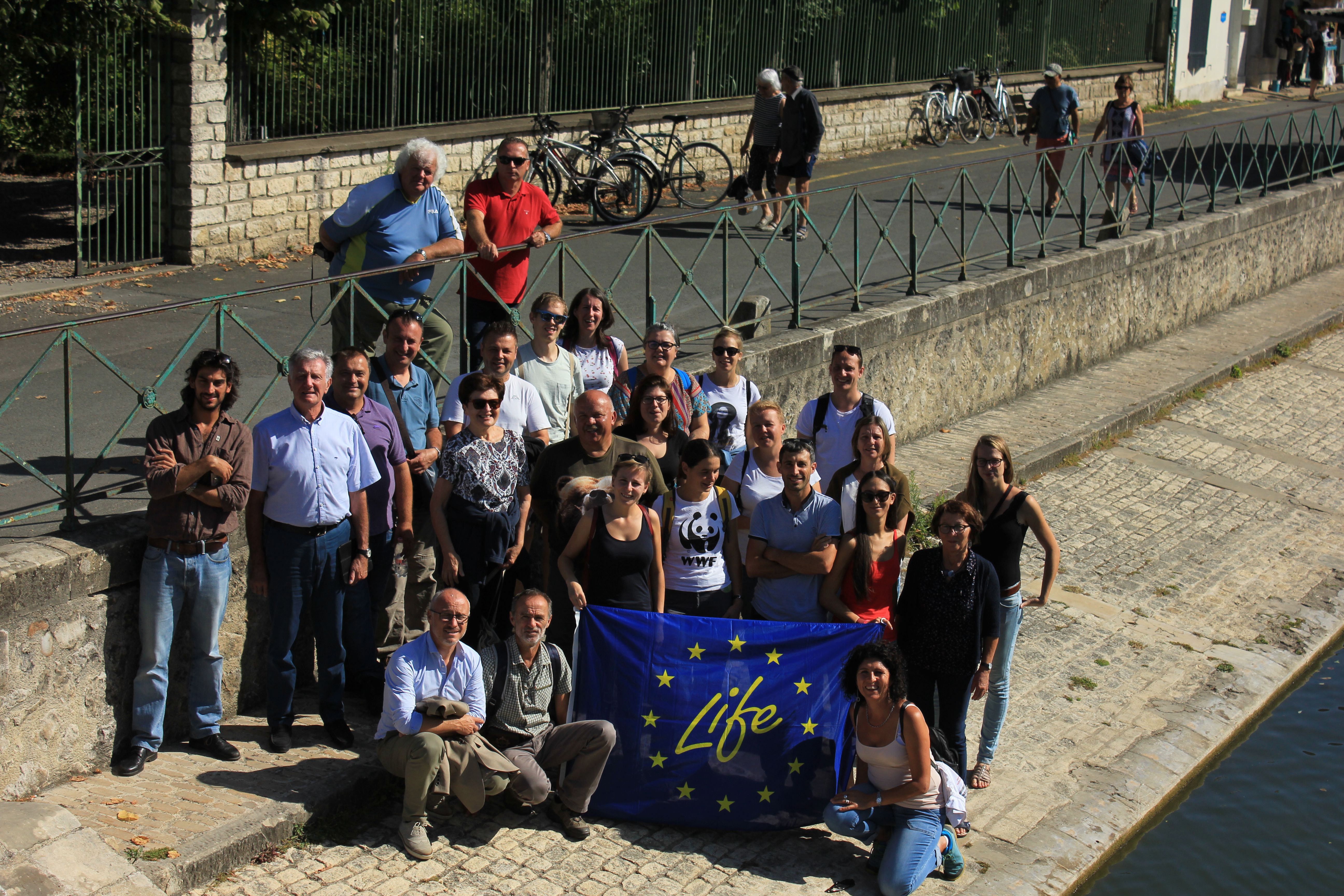 Within the framework of the “Municipalities as integrators and coordinators in adaptation to climate change”, LIFE16 CCA/HU/000115 (hereinafter referred to as “LIFE-MICACC”) project, the fifth study trip took place between the 16th and 18th September 2019, in the Marais-Poitevin Regional National Park, France. The organizing team was set up with colleagues – the beneficiary organizations implementing the LIFE-MICACC project – from Association of Climate-Friendly Municipalities (AOCFM), World Wide Fund for Nature Hungary Foundation (WWF), and the coordinating beneficiary, Ministry of Interior. From the  other associated beneficiaries, colleagues from three partner municipalities (Municipality of Bátya, Püspökszilágy and Ruzsa), the  General Directorate of Water Management (GDWM) and  the PANNON Pro Innovation Services Ltd. also participated on the study trip. As a professional representative of the Ministry of Interior, the Head of the Department of River Basin Management and Water Protection also participated, along with several external partner municipalities’ representatives.

The participants travelled on 16th September 2019 by plane to France with a transfer in Amsterdam. They arrived in Nantes in the late afternoon, where they continued their way on a rented bus.  After a long and tiring trip, they arrived in Niort in the evening, where they had dinner at a nearby local restaurant.

The Marais Poitevin Parc Naturel Régional phrase is translated to Marais-Poitevin Regional National Park in Hungarian however in Hungary we use the National Park classification for nature reserves, which must be protected from all agricultural and industrial use. The word of naturel (instead of national) in the French expression is referred to the difference that in these areas, in addition to taking into account the nature conservation interests, there is economic exploitation to, thus the Hungarian equivalent of “park naturel” is rather the name of a nature reserve or a nature park.

Thanks to the advanced water management system and the pastures and the reservoirs used for water retention, there is sufficient water in the canals for several consecutive years of drought. After the presentations, participants could ask their questions and discuss them with the National Park staff and elected local government officials.

The municipality currently has 1-year-long contracts with five local farmers to rent the municipal pasture. Participants also had the opportunity to meet a local farmer Alexis Gelot who was willing to answer any kind of question. This summer was also very dry here so the area needed watering. In the wet winter months, artificially created reservoirs are filled with water by pumps, which provide irrigation for livestock farmers and agricultural farmers in the hotter months. During our visit the area was also very dry with no rain for months so most of the farmers had already transported their animals to home. The local water authority’s experts are taken aerial photographs to map terrain and hydrological features of the area with great accuracy. After the calculations, they determine the number of animals in the given pasture area and where should they create the artworks and facilities providing ideal water management.

The final part of the study trip’s professional program was the visit to the Municpality of Nalliers, where 106 hectares of municipally owned pasture are located. The area was presented to the Hungarian delegates by André Boulot, a representative of the local farmers’ club representing nearly 1000 farmers and Jacques Rauturier, a local farmer cattleman. In this area, farmers collectively graze their cattle and horses. Like the ones seen in Poirée sur Velluire, the animals are free here. The hydrographic features of the area were presented by officials from the local water authority. Finally, the study trip participants had the opportunity to ask questions of all experts involved in the implementation of the National Park and also to the elected municipal representatives and local farmers.

On 18th September 2019 after breakfast, the group set off to Bordeaux. Before the plane took off, the participants had a chance to go sightseeing for a couple of hours. At 1 PM, the LIFE-MICACC team said goodbye to the French capital of red wines and started to the airport where an unexpected inconvenience happened. It turned out that our flight was cancelled due to the Amsterdam airport luggage carriers’ strike. The airline did not notify either the participants or the travel agent. After several phone calls, the travel agency informed the participants that they would be able to travel home in two groups on the next day. As the saying goes “In every bad thing, there is something good.”, participants were unable to travel home that day but the travel agency could only find accommodation for 21 people in Lacanau lying on the Atlantic coast. The lucky ones could even see the sunset on the coast. The next day, the participants travelled home in two groups. The first group got to Budapest with a transfer in Zurich, while the second group came home via Paris in the early evening. Despite the adventurous and exhausting journey the participants appreciated the study trip and the new experiences.

On the way home, participants shared their detailed professional views on the study trip with the help of a questionnaire and gave feedback on what they felt was useful and what they were taking home with themselves. Evaluating the answers, all participants found the study trip very useful by and large. They highlighted the Charte (Charte du Parc naturel régional du Marais Poitevin) as a key to a successful project which is not only widely accepted in society but also serves as a basis for the operation of the National Park by striking a balance between the various stakeholders. The accomplishment of local agreements to preserve the natural state of the area may be exemplary and can be adapted to domestic practice. In Hungary as a result of river regulations, swamps and marshes have disappeared but the water management in the National Park could be a solution for revitalizing these areas in our country. Intensive agricultural production and industrial livestock farming are environmentally unsustainable thus there is a need to encourage farmers at local level for extensive livestock farming. However, we must not forget that best practices can be transposed and implemented successfully just if we take into account the local specificities and conditions.

A detailed description of the visited sites is available in Hungarian in the document library of the project website (http://vizmegtartomegoldasok.bm.hu).

Written by Bettina Hugyecz and Petra Szatzker, Ministry of Interior