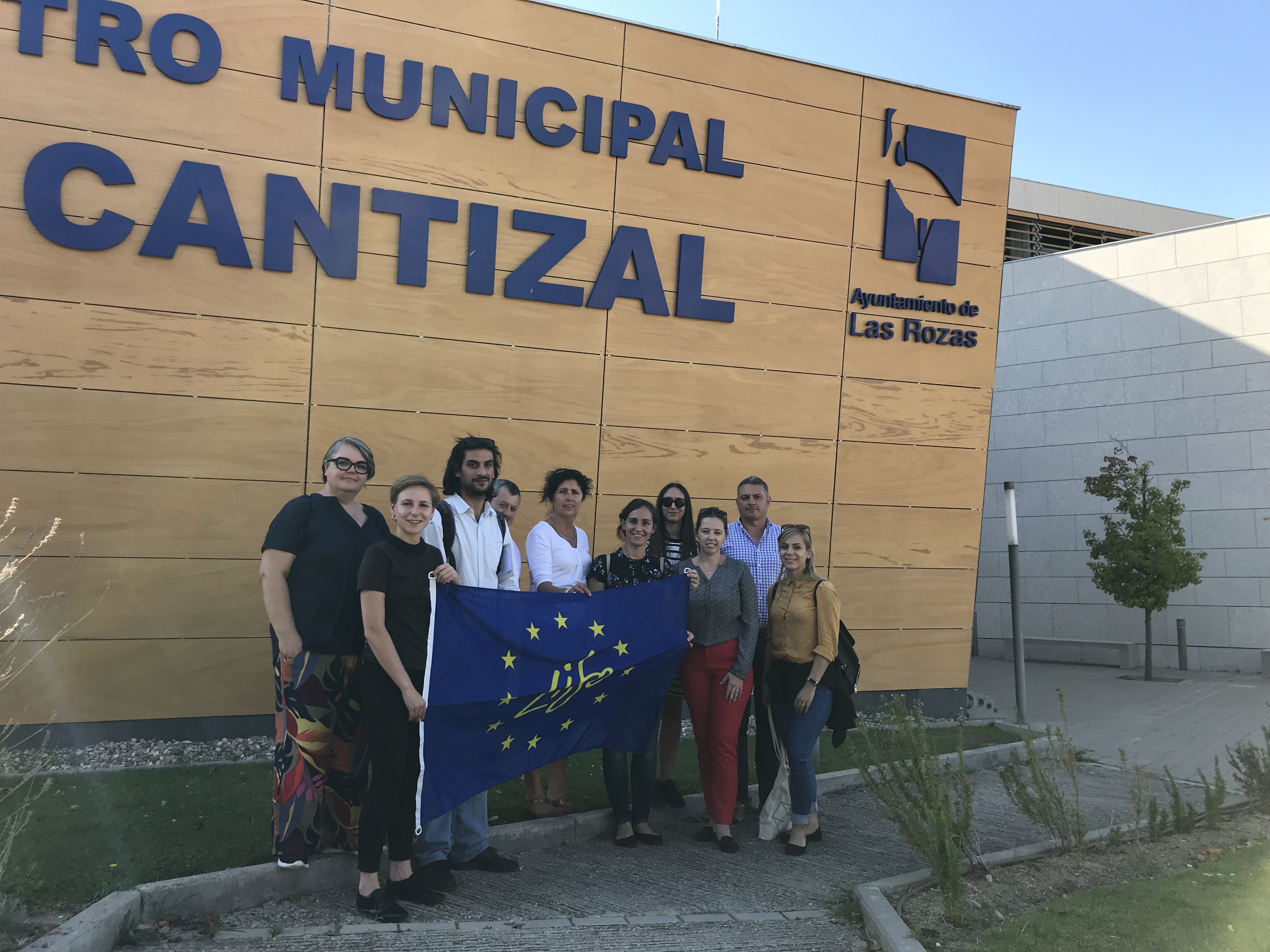 The 3rd networking visit within the framework of the LIFE-MICACC project took place in Madrid, Spain between 8th and 10th October 2019.  The aim of the visited LIFE SHARA project is to increase the adaptation and resilience of society to climate change on the Iberian Peninsula. The first stop of our visit was the office of the Madrid-based Biodiversity Foundation who act as a supporter institution by the Ministry of Environment. If a passenger steps into the building from the street it would soon feel that the nearly 100 people’s works – who work in the office – are closely linked to the sustainable development. The building had been used as a park house and a bank went through a complete transformation when the designers made sure that everything happens in the spirit of recycling.

First Ignacio Torres, Subdirector of the Foundation welcomed the participants who was followed by a presentation by Víctor Gutiérrez, Coordinator of LIFE and European Union projects who briefly described the operation of the organization, the projects and everyday work. The relationship between the Biodiversity Foundation and the Ministry of Environment is relatively free.  Although the Ministry defines the main guidelines and its approval is needed to start a particular project, the day-to-day professional work at the Foundation doesn’t get lost in the maze of bureaucracy. According to Spanish colleagues by “giving you a free hand” you can be more flexible and efficient in your day-to-day tasks.

Part of the Foundation’s budget comes from the Ministry in the form of grants (about EUR 8-9 million per year) in addition they maintain themselves from the sums received from the various projects they collaborate on.  There are currently 3-4 running LIFE projects targeting four key strategic areas: terrestrial ecosystems, marine ecosystems, climate change adaptation and green economy.

After the Spanish partner’s presentation, Zsuzsanna Hercig (Ministry of Interior, LIFE project manager) introduced the Hungarian LIFE-MICACC project then Anna Pons, project coordinator on the LIFE SHARA project, introduced LIFE SHARA project which started in September 2016 and runs until February 2021. The Spanish public administration is divided into three levels: 17 autonomous communities, 50 provinces and 8131 local governments. In 2006 the National Adaptation Plan was adopted and the Biodiversity Foundation was involved in its Third Work Plan (2014-2020). As a result of the National Adaptation Plan in recent years it has been observed that more and more municipalities are preparing climate vulnerability assessments or climate strategies individually or in cooperation with neighbouring municipalities.  As a proof of Spain’s commitment to the subject in 2013 they set up the so called AdapteCCa Platform as a tool of information sharing and consultation on the topic of climate change adaptation. As a part of awareness raising the LIFE SHARA project puts particular emphasis on different communication panels such as publications, brochures, short films, presentations and exhibitions in Spanish, Catalan and Basque. As an example to be followed it is important to note that the information platforms were designed to not only be usable in a given project but they can be applied and developed further.

The second stop of our networking visit was Madrid Rio, an artificial park on the banks of Manzanares River. Before the project started in 2007 there was a motorway on both sides of the Manzanares River. The river was impossible to approach so the locals had no chance to use it for recreational purposes – said Rafael López, head of the Climate Change Unit of the Madrid City Council. The traffic was squeezed out from the over 80 000 square kilometres area which was replaced - among others - by underground routes. In addition to the rehabilitation of the Manzanares River elements of semi natural architecture also here parks, bridges, cycle routes, indoor tennis courtes, soccer fields, climbing walls, skateboard parks and BMX courses. The investment was completed in 2011 and nearly 47 projects had been realized in the beautifully landscaped area from nearly 280 million euros.

The team then took the train and headed to Las Rozas de Madrid where Juan Vincente, a member of the local government responsible for protecting the natural environment, was waiting for the participants. First we went to an eco-school where environmental education plays a key role in education. The elementary school also participated in the LIFE project Las Rozas por el clima from 2010-2013 (http://ec.europa.eu/environment/life/project/Projects/index.cfm?fuseaction=search.dspPage&n_proj_id=3490&docType=pdf). The kids have the opportunity to grow their own plants in the vegetable garden in the schoolyard but they also organize various competitions and exhibitions in the sustainability topics at school. Environmental education and awareness-raising cannot be started at a young age enough.

As a part of the afternoon program participants visited another park where the irrigation system was controlled by a telephone application and solar panels are connected to the municipal’s main building. The application saves a lot of water but it would be even more sustainable to operate the system if fallen and collected rainwater would be used for irrigation.  The municipality set up a charging station for electric cars powered by solar panels which placed on the top of the parking lot. Everyone can charge their vehicle with renewable energy for free at this station. The municipality also covers most of the energy demand of its own building from the solar panels’ green energy covering the roof of the building.

The visit highlighted the many different ways in which we can approach the issue of increasing adaptability and awareness on climate change. It is important to see that real change can only be achieved by coordinating different activities. In addition, effective communication with target groups and the delivery of the message to different age groups are essential for effective engagement. During the visit participants were able to see a number of good practices on changing the people’s attitude which can also be adapted to the LIFE-MICACC project to promote project results and support awareness-raising.

More about the LIFE SHARA project (in English): http://ec.europa.eu/environment/life/project/Projects/index.cfm?fuseaction=search.dspPage&n_proj_id=5679&docType=pdf