Droughts, floods and heatwaves – extreme hydrological events caused by climate change affect people living both in cities and in the countryside. According to forecasts, these extreme weather events are going to become more frequent, and will severely affect Hungarian communities. However, cost-efficient and environmentally-friendly solutions exist that can help protect against the effects of climate change. Within the framework of the EU supported “Municipalities as Integrators and Coordinators in Adaptation to Climate Change” LIFE-MICACC Project, co-ordinated by the Ministry of Interior of Hungary and with the participation of WWF-Hungary, the first prototypes of natural water retention measures have been completed in five small rural settlements.

According to climate models, long dry spells, heat waves and droughts as well as intermittent inland waterlogging, floods and violent downpours are becoming more severe and will cause more frequent problems in Hungary. Many small settlements suffer from the effects of climate change and extreme meteorological events. For example, a record 1000 mm annual precipitation caused widespread inland waterlogging (the year of the “great inland waters”) in 2010 was followed by two dry years. In 2011, one of the driest years, the country only received 400 mm of precipitation, and 2012 did not bring any relief either. The past two years, 2018 and 2019 were the two hottest years in Hungary since the meteorological measurements began in 1901.

Under the LIFE-MICACC Project, which has been running since 2017, partners are seeking practical solutions that can be applied in Hungary to make small municipalities more resilient to hydrological extremes caused by climate change.

The pilot project sites face water management problems that are typical all around the country, therefore the solutions they apply can serve as good-examples elsewhere. Püspökszilágy experiences many flash floods, typical of mountainous and hilly areas. In Rákócziújfalu, both inland waterlogging and drought cause damage to the agricultural sector. Bátya has a problem with the alternation between sudden downpours and long dry periods. Ruzsa has been struggling with water shortages and diminishing groundwater levels. In Tiszatarján, the drying of floodplain wetlands and the spread of invasive plants indicate a changing environment.

The good news is that preparing for the expected negative effects is possible, and appropriate actions can be taken at the municipal level. Local governments are key actors in promoting and coordinating climate adaption at the local level and in involving stakeholders in the process. The five small villages in the project are testing how nature-based water retention measures for climate adaption can be effectively implemented from design to execution through municipal coordination. The prototypes were constructed and finalised by the end of June 2020. What they have in common is that they are all small-scale, cheap green-infrastructure investments that provide space for valuable water. As a result, water will not cause any problem when there is too much of it, but can be preserved for the dry season when there is great need for it. The retained water will serve to create improved freshwater habitats; replenish lakes, reeds and floodplain forests; and in this way create breeding grounds and sanctuaries for flora and fauna.

A landscape that is well supplied with water is both beneficial for people and agriculture because it acts as a buffer against extreme weather events. In summer, heatwaves are mitigated by the cooling effect of evaporation, and droughts are reduced through the recharging of groundwater and dew formation. In autumn, water’s high heat capacity prevents early frosts. Finally, as an exciting landscape feature, freshwater habitats can make the rural landscapes more attractive and offer possibilities for sustainable ecosystem services.

“We expect tangible results from the pilot project, but on the landscape level, broader changes can only be expected if more villages follow this example and start implementing water retention measures. Therefore, the aim of this project is to transfer these pilot solutions to other areas in both Hungary and abroad where are struggling with similar problems. To this end, based on our experience, we are compiling an adaptation guide for local municipalities, which will be presented at the end of 2020” – said Klára Kerpely, Climate Change Expert, WWF-Hungary.

“The most significant goals of the project are to present some not yet so well-known low-cost, complex and efficient natural water retention solutions in Hungary, and to strengthen the key role of municipalities in climate change adaptation at the local level. Our long-term goal is to stimulate the uptake of these solutions by other local communities as well. We strongly believe that every settlement has a natural resource on which they can build these solutions, such as old clay-pits or unused sections of drainage channels which can find a new function and serve as sites for water retention. We would like to support the local governments in this process. By the end of 2020, an interactive e-learning curriculum will be developed which will present the fundamentals of climate change, its most basic principles and interlinkages, and the forms of adaptation for local governments. In addition, by the end of the project, field visits will be organised where we will welcome the interested municipal leaders from around Hungary.” – said Zsuzsanna Hercig, Hungarian Ministry of the Interior.

LIFE-MICACC Project partners include the Ministry of Interior of Hungary, the General Directorate of Water Management, the Klímabarát Települések Szövetsége (Association of Climate-Friendly Settlements), Pannon Pro Innovációs Kft, WWF-Hungary, and the municipalities of Bátya, Püspökszilágy, Ruzsa, Rákócziújfalu and Tiszatarján. The project is financially supported by the European Union LIFE Programme and the Ministry of Interior and the Ministry for Innovation and Technology.

Püspökszilágy: slowing the flow to protect the settlement against flash floods

In Püspökszilágy, the village defended itself against the double trouble of droughts and floods. In particular, the Szilágyi Stream in the village is prone to flash flooding. LIFE-MICACC suggested a new solution, leaky wooden dams. The dams have already proven their worth during several thunderstorms this season. The emphasis was on slowing down the flow and preserving the water instead of draining it as quickly as possible. On the upper catchment of the stream above the village, international best-practice examples were used to build seven leaky wooden dams made of locally sourced logs on erosional gullies that join the Szilágyi. In the event of a thunderstorm, the water suddenly accumulates behind the log dams and the eroded soil washed away from the upper plough lands can be retained and the water released slowly. Moreover, four stone sediment traps were renovated. If enough small obstacles are made in enough areas, cumulatively they will decrease the flood peak and prevent flooding. In addition, further down along the stream a side-reservoir has been built in a wetland floodplain forest, which acts as a storm water buffer during a flood and also serves as a wetland during the drier summer months. 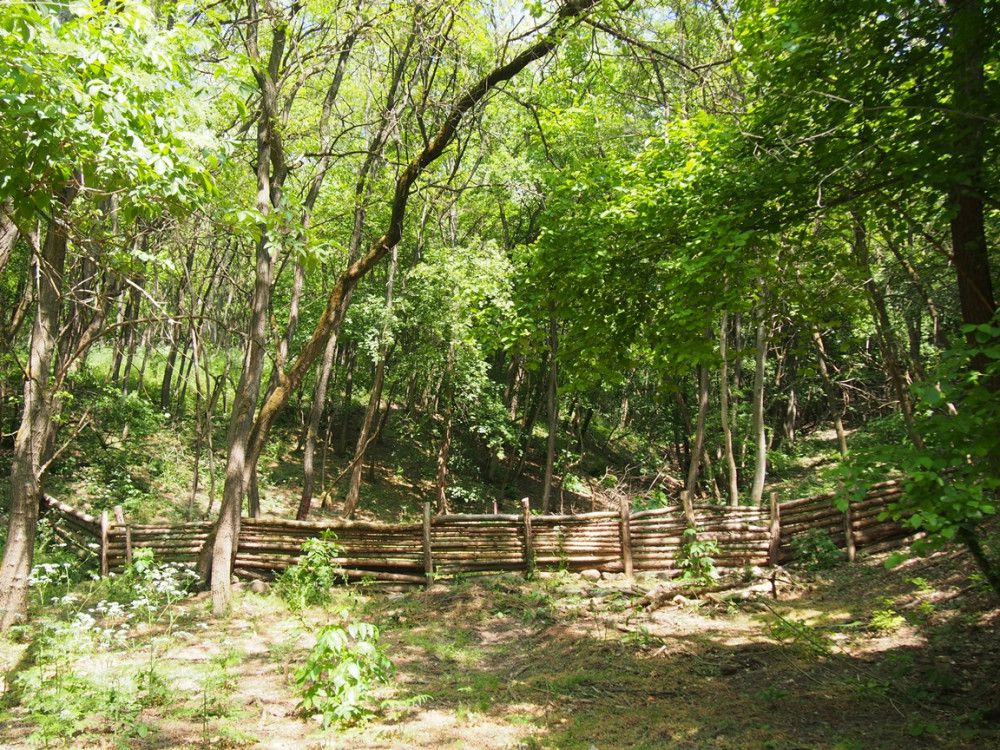 Bátya: an innovation in rainwater management

In Bátya, sudden downpours often flood some streets and cellars. The average annual rainfall in Bátya does not reach 550 mm, which is much less than necessary. Therefore, instead expanding water drainage, the municipality decided to collect the rainwater. The LIFE-MICACC Project diverted the collected rainwater to an old and earlier abandoned clay pit on the outskirts of the village. The result was a new, almost one hectare wetland habitat. The newly created small lake preserves Bátya’s valuable water resources for the drier season. The lake infiltrates water deep into the soil to recharge groundwater, improves the micro-climate through evaporation, supplies the flora with water and mitigates the effects of climate change. One shore is easily accessible and is therefore suitable for recreation. The other side is untouched and serves as a shelter for wildlife such as reptiles and birds nesting in the reeds. Native tree species such as black poplar, white willow, narrow-leaved ash and alder were planted around the lake together with local residents.

Rákócziújfalu: no inland water is wasted

In Rákócziújfalu, half way along the Tisza River, water management problems are arising that are typical to the Great Hungarian Plain. This region is the driest in the country because the annual number of sunny hours is high, and therefore the potential for evaporation exceeds the annual rainfall. However, in the spring, the inland water from snowmelt or rain that stays on the ground (inland waterlogging) often causes damage to agriculture. A water reservoir created from municipal investments now offers a solution to the dual problem of drought and inland waterlogging. The reservoir redirects the excess water that is normally released into the Tisza River during water-abundant spring periods into a drainage system to a freshwater habitat created in a low lying area instead. An adjustable sluice gate on the canal allows water to be retained in the canal, and mitigates drought along the canal further upstream. If there is no snow or rain due to climate change and the spring water abundance falls short, as happened this year, water can be supplied to the small natural reservoir from a nearby fishpond; or the water can be retained from the Tisza River if the water level is sufficiently high. 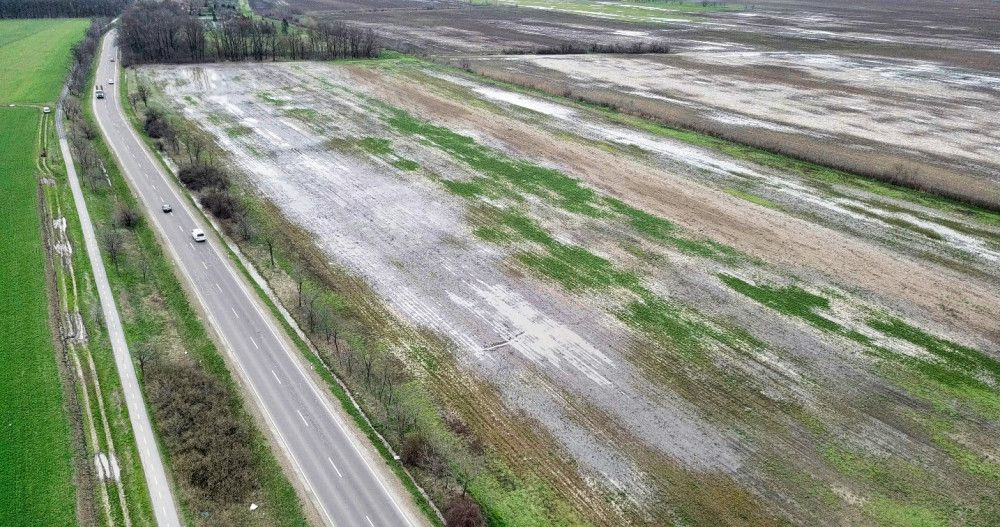 In Ruzsa, water has become a scarce resource. Drainage canals have been empty here for many years. The village faces the shortage of natural surface water resources and the sinking of the groundwater level. The situation is exacerbated by the increasingly warm and drier climate. Every drop of water counts. The average 150 m3 of treated greywater released by the sewage treatment plant, and the 10-20 m3/day of technological water (water used to rinse the system) flowing out of the new drinking water purification plant are both valuable resources. LIFE-MICACC found a solution to retain both water resources. The greywater resources are no longer allowed to flow into the canals and away from the settlement, but are collected into small lakes instead. After passing to a second basin they seep into the soil. In addition, a small drainage canal with three small wooden sluice gates are maintained so that if too much water appears in an unusually wet period, the water is retained in the canal and is allowed to inundate the pastures along the canal instead of being drained. 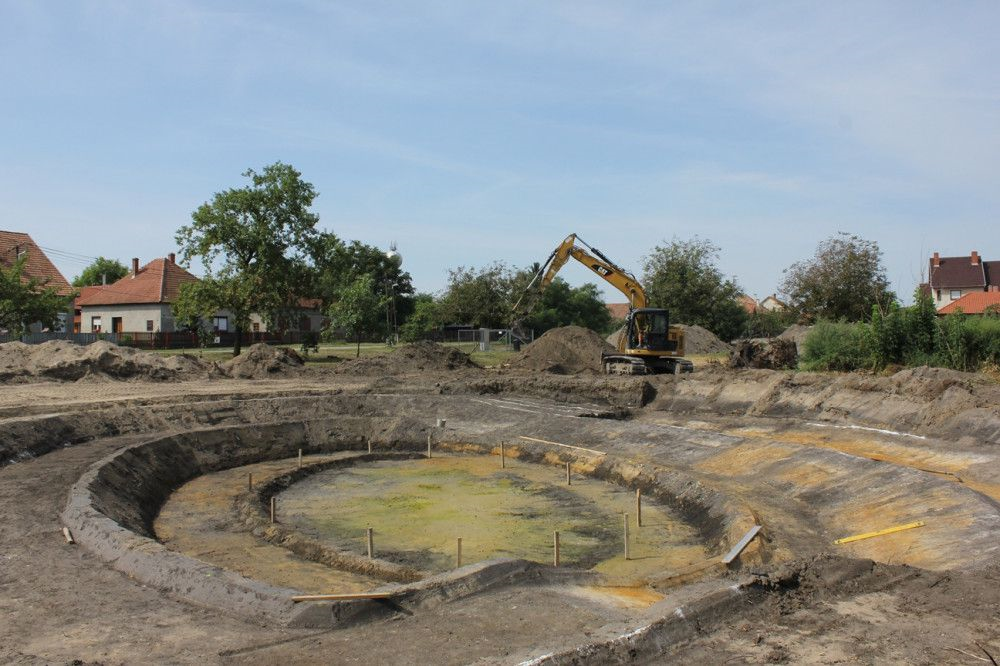 Tiszatarján: landscape management on the foreshore

Tiszatarján is closely connected to the Tisza River. After the regulation of the river, and due to the drainage of wetlands, the spread of arable farmland on the floodplains, the intensifying effect of drought, and the reduction of animal husbandry, floodplains were overrun by false indigo (Amorpha fruticose), an invasive shrub species. A few years ago, in cooperation with WWF-Hungary a sustainable floodplain management model was developed for Tiszatarján that would fight off the invasive plants. Grazing by Hungarian grey cattle and water buffalo on the floodplain prevents the return of the invasive shrubs. However, as a result of climate change, the lake system formed of clay pits that serve as a wetland habitat for the water buffaloes dried out. In order to increase the retained water, the pits have been extended with a new basin. Moreover, natural slopes were created on the shores to create better habitat for the grazing animals. A pier was built from where the visitors can observe water buffalos up close. The Water Buffalo Nature Trail will soon open. 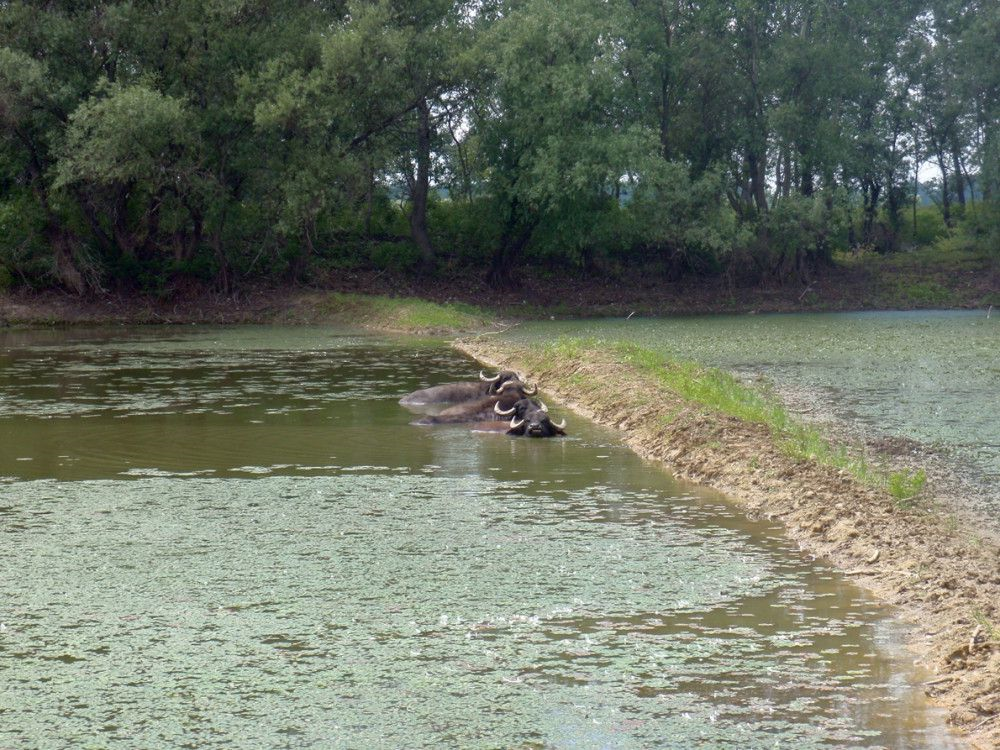 Photos of the project locations:
https://drive.google.com/drive/u/2/folders/1eTTyoXgsJk-pwE2auok_-thzN2Mg0XP4