“Hungary is a freshwater-superpower!” – or at least that’s what we, Hungarians like to think of our country. However, this statement is only partially true. Why? This is illustrated in the info-graphics below. We have access to freshwater from three different sources: precipitation, groundwater resources and rivers. Let’s look at these three distinct sources of water one-by-one. 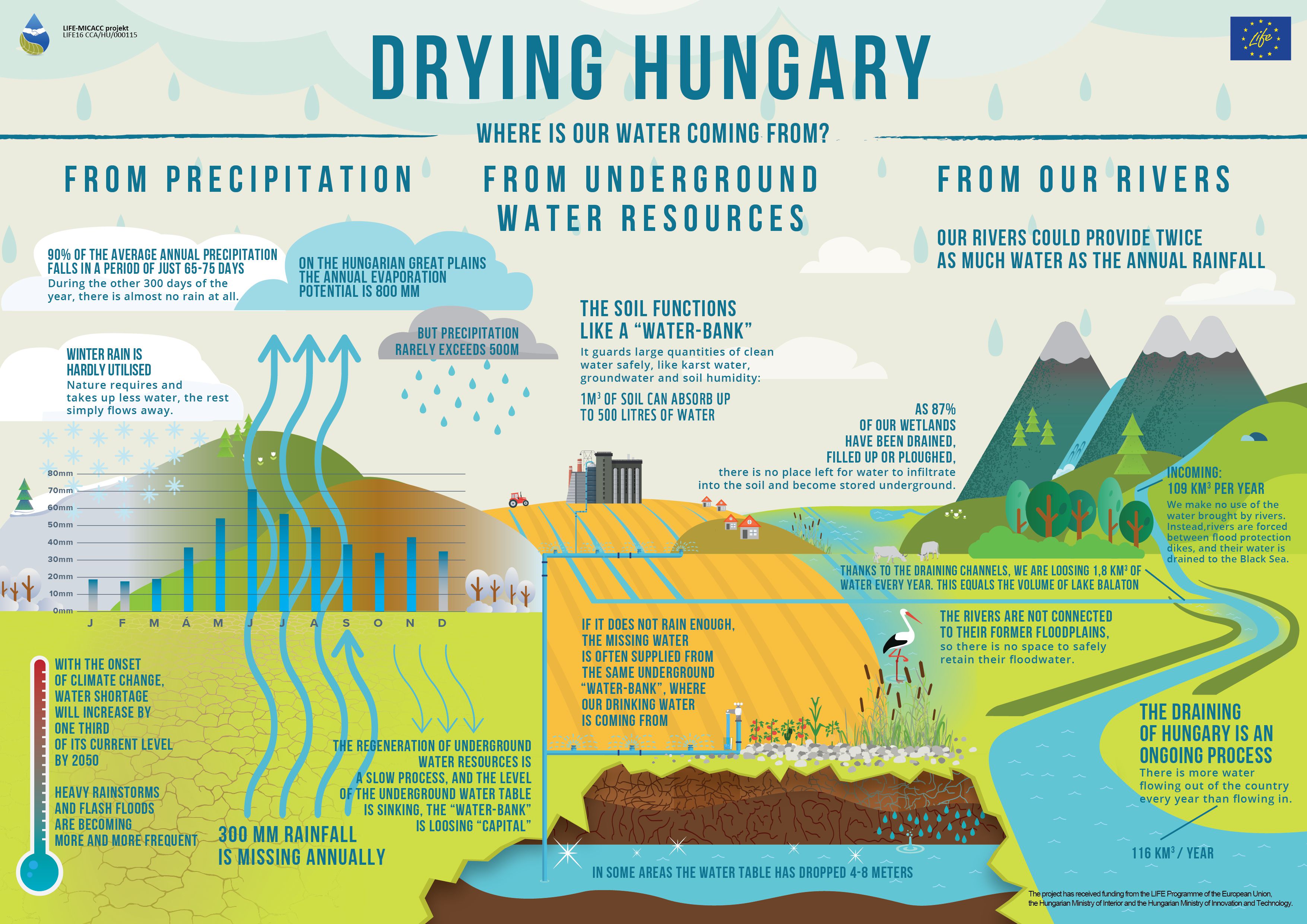 Unfortunately, Hungary is a dry country. On the majority of its area, less rain is falling each year than what could evaporate, if enough water was available. On the Great Plains (Alföld) for example, the average annual precipitation is around 500 mm, while potential evapotranspiration reaches around 800 mm, implying that there is a deficit, and 300 mm of rain is missing each year. Another problem with precipitation is its uneven distribution: some falls in the winter, which is not readily taken up by living organisms, and a significant part arrives in the form of severe thunderstorms, falling too quickly, which cannot infiltrate into the ground, and is lost through runoff, flowing away through canals, streams and rivers. Climate models predict that the distribution of precipitation is going to become even more uneven with the onset of global climate change.

The table below shows the number of days required for 50%, 80%, and 90% of the annual precipitation to fall at LIFE-MICACC pilot sites, based on 50 years of precipitation data. The numbers are very similar at each pilot site: for example, half of the annual amount falls everywhere in less than three weeks

1CARPATCLIM database, based on daily rainfall data from 1961 to 2010

Our other source of water is from underground water resources. A lot of water is stored underground safely, such as soil moisture, groundwater, karst water. Under the ground, pollutions spread more slowly, and the water stored there is usually cleaner; it is no surprize that our drinking water comes from these sub-surface reservoirs, instead of directly being taken from rivers and lakes, which are immediately reached by a pollution event. In addition, groundwater is not directly in contact with air, so there is no loss to the atmosphere through evaporation. To sum up, both the quality and the quantity of groundwater is much better protected than that of surface waters, so we may as well call sub-surface water resources the ‘water bank’.

If there is not enough rainfall, water shortages are often compensated for from underground water sources. That in itself is no problem, because these resources can renew. The problem is that their rate of renewal is slow, often much slower than the rate at which we extract them. And while the exploitation is increasing, the rate of replenishment is slowing down: in fact, groundwater supplies can be renewed by allowing rainwater and rivers to infiltrate into the ground. Wetlands, lakes, swamps, floodplains and forests provide the required surface for this process. In Hungary, however, most of the wetlands, floodplains, have been drained, and many forests have been converted into arable land. As a result, groundwater levels in many parts of Hungary are sinking. Every year we put less water, or ‘money’ into the water bank than what we use up. Our savings are being depleted.

Our third major source of water would be rivers, which is why we say Hungary is a freshwater-superpower. Rivers bring about twice as much water to the Carpathian Basin each year as the amount of precipitation. However, rivers are confined between flood protection dykes, and their water does not spread on floodplains, does not flows into sidearms, and oxbow lakes. As such, they cannot replenish groundwater resources, and leave the country unutilized.

It’s like saying that a Hungary has lots of foreign visitors, so we are a leading tourism-superpower, but in reality these foreign visitors just travel through the country on a highway, from Romania to Austria. As long as they do not exit the highway to spend a day seeing something, they’re not really tourists, just bypassers. The same holds true for water: if we do not let it exit the riverbed, we cannot really make use of it.

Finally, water management in Hungary is dominated by drainage and flood defence: draining canal-systems drain 1.77 million m3 of water into rivers each year, from areas that are often drought prone a few months later. Thanks to a drainage-centric management, rivers discharge more water at the southern borders of the country (116 km3) than what they bring in on the north (109 m3).  Every year, we lose about 7 km3 of water, which equals three and a half time the volume of Lake Balaton, the biggest lake of Hungary, and of Central-Eastern Europe. 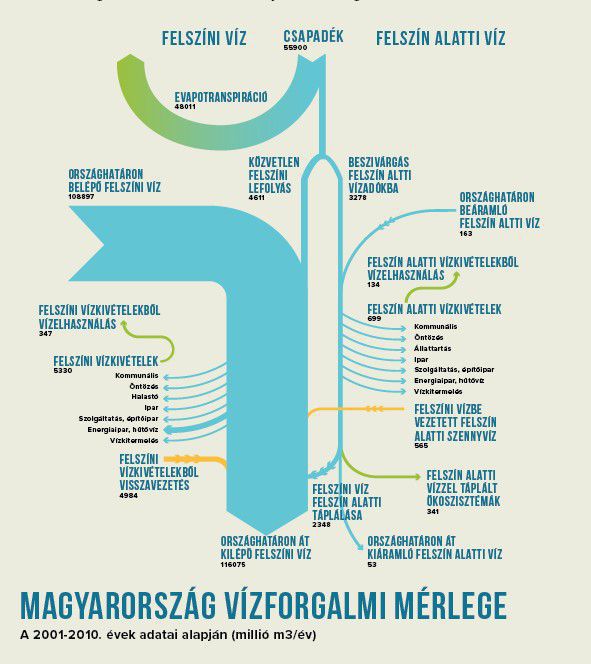 Hungary’s water balance based on the Hungarian National Atlas

To sum up, Hungary is constantly drying up, our water supplies are dwindling, though we could have plenty of water if properly managed. Instead of draining water, the solution would be to retain it, in a small-scale natural retention systems. The LIFE-MICACC project team is working towards that goal.